“The Colored, as well as the white laborers of the United States, are not satisfied as to the estimate that is placed on their labor, as to their opportunities, as to the remuneration of their labor, the call for this convention, and the very general and highly intelligent response which I gaze on in you, my fellow delegates, attest. No other class of men would be satisfied under the circumstances; why should we? We desire Union with the white laborer for a common interest.”

On the sixth of December in 1869, over two hundred African heritage laborers, mechanics, artisans, tradesmen, farmers and trades-women assembled in Washington, DC to organize the Colored National Labor Union (CNLU). Over several days, working men and women of color would elect Baltimore ship-caulker Isaac Myers president and adopt a broad platform covering relations between labor, education and economic prosperity. Most extraordinary for the day, the CNLU was egalitarian, accepting men and women, skilled and unskilled workers as active members. And unlike the National Labor Union, the CHLU welcomed all workers regardless of race. Fortunately, by the mid 1880’s, the Knights of Labor Union organized under the motto, “An injury to one is a concern for all” and became an integrated organization representing the labor rights of all American workers.

One visionary business leader sought to unite and advance African Americans through labor at a time in our country’s history when most people of color had only recently broken the chains of slavery. George T. Downing was born in 1819 in New York City to a free family of color and father who operated a highly successful Oyster House restaurant. George Downing arrived in Newport by 1844 bringing his restaurant and hospitality services to meet the fast-growing catering and lodging demands of New York and other elite American families looking to transform Newport into America’s most fashionable summer resort. By 1857, Downing was well established in Newport as the proprietor of the Sea Girt luxury hotel with confectionery and catering businesses along Bellevue Avenue which he named the “Downing Block.” As part of Downing’s business model, he also opened catering businesses in Providence, RI, Boston and Washington, DC – operating as the official manager of the dining room for the United States House of Representatives. His access to business and political leaders would enable him to put forth his own political interests and opinions on the abolition of slavery, integration of public schools and his greatest aspiration, to advance the economic prosperity of newly freed slaves through vocation and labor organization. 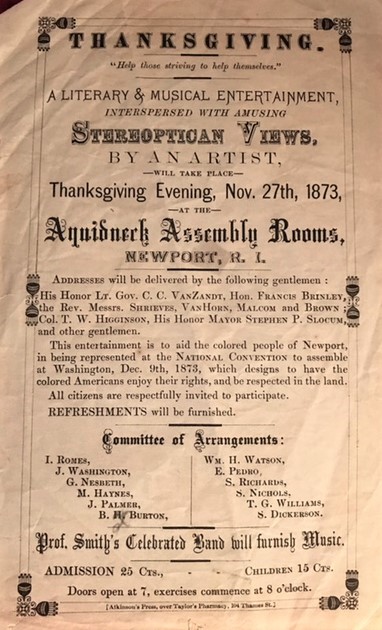 As a successful Newport and businessman and community leader, Downing advocated for workers’ rights and racial equity. In 1873, Downing helped to organize Newport’s participation in the National Convention for Colored People in Washington. But it was the electrifying speech by Downing a few years earlier in 1869 that set the tone for African heritage equal and employment rights as free men and women in America. In an important part of his speech to delegates, Downing stressed the importance of African Americans in realizing all three parts of the Declaration of Independence that offered to all American citizens the sacred & undeniable rights to the “preservation of life, & liberty, & the pursuit of happiness.” Downing believed that African Americans had earned the right to life through surviving slavery. Liberty was achieved through the end of the Civil War and the Fourteenth and Fifteenth Amendments to the United States Constitution. But the pursuit of happiness would only come from economic prosperity through education, training and gainful employment. Downing made the case that by organizing under the union labor banner, African American men and women could fulfill their rightful place as full American citizens declaring to the crowd:

“The colored man’s struggle until now has been for naked existence, for the right to life and liberty; with the fifteenth amendment, henceforth his struggle will be in the pursuit of happiness; in this instance; it is to turn his labor to the most effective account, to be respected therein; the most we can hope to effect in this gathering, is a crude organization; the formation of a labor bureau to send out agents, to organize throughout the land, to effect union with laborers without color.”

Today, as we celebrate across the nation the social and economic achievements of American workers, we need to also recognize the achievements of African American men and women who struggled mightily building our great country’s wealth and prosperity. African heritage people played a crucial role in laying our nation’s foundation, persisting through centuries of slavery and servitude while regarded as little more than chattel property. Even after the abolition of slavery, struggling against brutal sharecropping systems and then the rise of Jim Crow, blacks were dehumanized and treated as second class citizens; but with great strength, resilience and determination, African American men and women were able to thrive in the face of racism, pushing forward to build successful businesses and advocate for equal rights across all fields. Fortunately, through the vision and leadership of individuals like George T. Downing, working African American men and women would organize to obtain their rightful place in the pursuit of happiness and prosperity in America. Happy Labor Day. 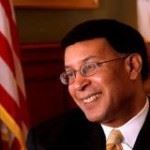 Keith W. Stokes is Vice-President of 1696 Heritage Group and a frequent researcher and contributor to RIBHS.